Graphic shows number of Afghan forces since 2014 and map showing who controls which Afghan districts.

May 1, 2018 - The number of security forces personnel has fallen by about 10 percent over the past 12 months, a U.S. government watchdog has said, amid reports of desertions and high casualty rates.

The number of security forces personnel has fallen by about 10% to just under 300,000, according to the latest report from the Special Inspector General for Afghanistan Reconstruction (SIGAR) which paints a grim picture of the security situation in the war-torn country.

The findings come on the heels of another deadly day in the capital, Kabul, when twin blasts killed at least 25 people.

The attacks, a week after 60 people were killed as they waited at a voter registration centre in the city, underlined mounting insecurity despite repeated government pledges to tighten defences.

At the same time, the Taliban and other insurgent groups now control or influence 14.5 percent of Afghanistan's 407 districts -- the highest level since SIGAR started recording such data in late 2015.

Last August, President Donald Trump announced the U.S. military would stay in the country indefinitely. The U.S. said it would send 3,000 extra troops. 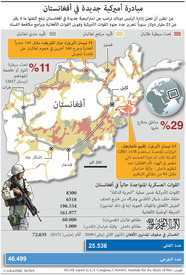