2016 set to be hottest year on record

November 14, 2016 - Global average temperatures in 2016 are likely to be the warmest on record, according to preliminary data released by the World Meteorological Organization. Temperatures from January to September were 0.88 degrees C above the long-term (1961-90) average and 1.2C above pre-industrial levels. The Paris Climate Agreement, backed by almost 200 nations including U.S. but rejected by President-elect Donald Trump, has the overriding goal of limiting the rise in temperatures to “well below” 2C above pre-industrial times. 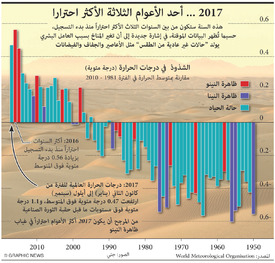